We asked chefs to tell us about how they cook.
Eye-witness accounts of their own recipes and a flute of Berlucchi’s latest arrival, its ’61 Nature 2010
The narrative was the inspiration for ONE CHEF, ONE WINE, portrait-on-the-move of two fascinating personalities.

Come with us on this journey of discovery.

Our current adventure in a celebrity kitchen is an encounter with Michele Biassoni and Masaki Okada.

Michele Biassoni is a young chef boasting impressive international training, while Masaki Okada is a Japanese maestro who confesses a deep love for Italy’s culture and cuisine.

They are the two guiding spirits of Iyo di Milano, Italy’s first “ethnic-cuisine” restaurant to be awarded a Michelin star.

Michele Biassoni started his professional activities in his grandmother’s kitchen, then polished his skills is the starred establishments of Martin Berasategui in Spain, Il vino d’Enrico Bernardo in Paris, and Sadler in Milan.

Masaki Okada, master of the Kaiseki tradition, fell in love with Italian culinary traditions upon watching a TV program on the subject; moving to Italy, he travelled the peninsula from Puglia to Tuscany, the4n stopped in Genoa and worked alongside Haruo Ichikawa in… Iyo.

Biassoni e Okada met each other at that establishment in Via Piero della Francesca and through their art endowed its international cuisine with an emotional charge coherent with the philosophy and name of the restaurant, which means, in fact, fluctuating world.

Two chefs, and two worlds apparently “worlds apart” but in reality perfectly compatible: Biassoni in the kitchen, Okada at the sushi. Hot and cold. The many become one, diversity folds into synthesis. Their respective cultures of origin become access points to eloquent new promises.

This is precisely the significance of the dish that they suggested for A Chef A Wine—a mullet fillet seared with oil drizzled on the skin: crunchy on the outside and soft on the inside, served with spring onions sautéed with sesame seed oil, green jalapeño crème, lemon-ginger aspic, and soy-infused toasted sesame.

A dialectic of opposites whose sublimity is further heightened by a pairing with Berlucchi ’61 Nature, the very quintessence of the Franciacorta growing area.

This Nature represents an homage to purity, since its dosage contains no sugar, and it offers an extraordinarily-complex suite of aromatics and a truly remarkable balance throughout its dynamic progression, making it a splendid partner for all the courses of a meal.

It is at its sensory best when accompanying dishes whose complexity reveals culinary inventiveness but at the same time arouses sublime sensory sensations. 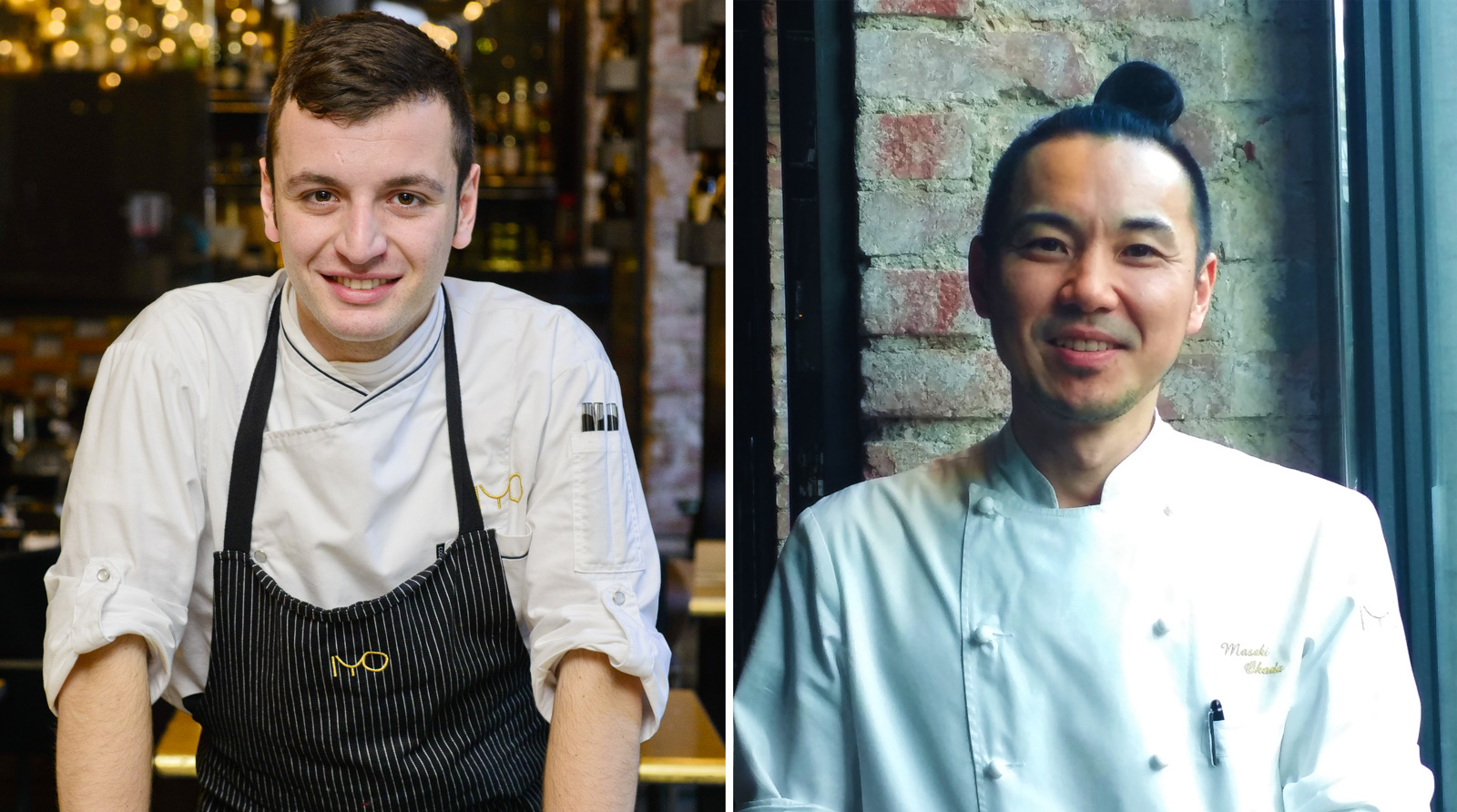 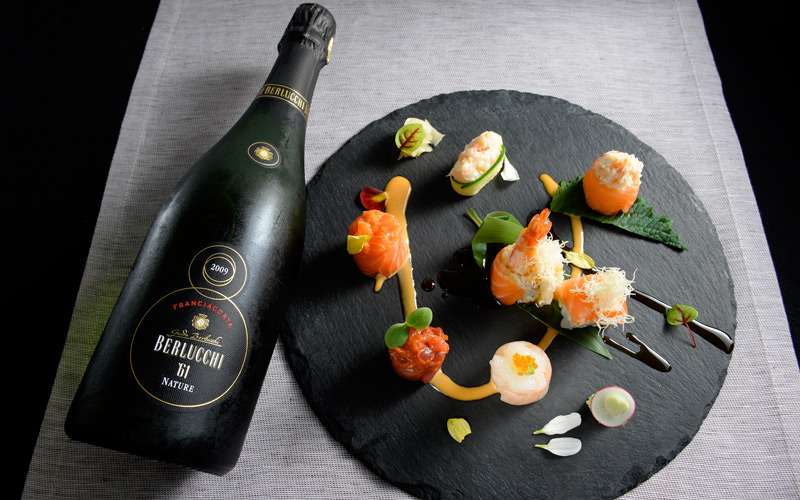 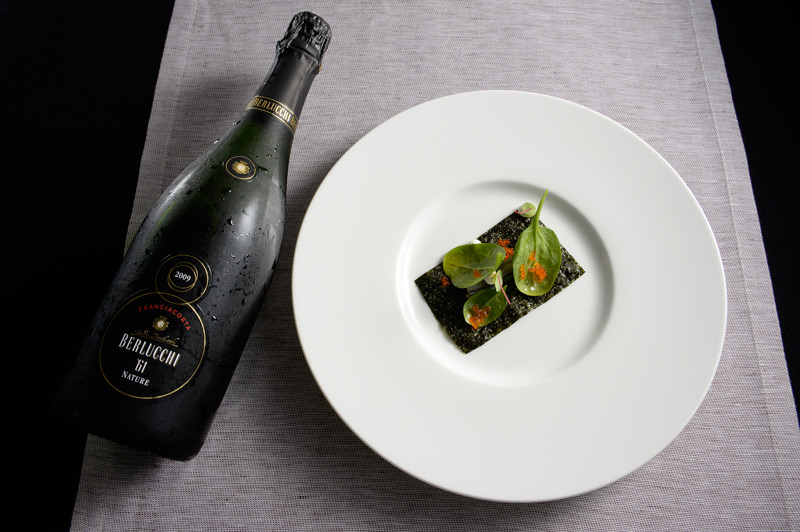 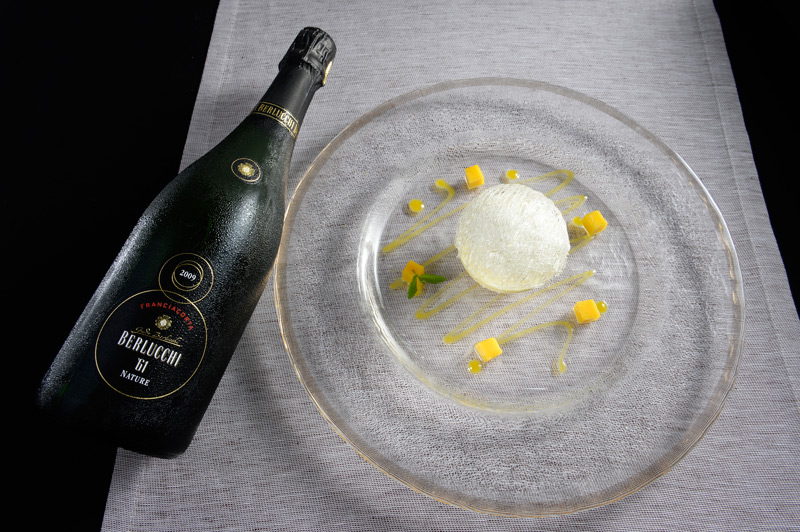