HERE’S HOW OUR CUVÉES ARE MADE

“One of my old and very expert oenology professors at Montpellier used to say that assembling a cuvée is like composing a symphony,” recounted Arturo Ziliani, Oenologist and Vice President of Berlucchi.
He continued: “Thirty years later, what he taught me is still quite apropos.”

Ziliani has been Berlucchi’s winemaker since1988, when he worked alongside his father Franco (who created the first Franciacorta, in 1961), and over the last twenty years he has had overall responsibility for production.
Guido Berlucchi produces four lines of DOCG Franciacortas, wines with very distinctive, individual sensory signatures: the cuvées combining Chardonnay base wines, which are marked by elegance and finesse, and those of Pinot Noir, which represent body and strength, must respect the established identity of the various wines.

“We use the term cuvée for the “assemblage” of still wines, which are made from different grape varieties, grown in different vineyards, often belonging to different vintages. We the add a mixture of cultured yeasts and cane sugar to that final cuvée, which will create the effervescence, that miracle in the bottle, which raises to a greater power the original qualities of the base, and reveals, many months later, a completely new wine, Franciacorta.”

Continues Ziliani: “Our starting point consists of the 150 base wines at our disposition, which are from the grapes grown in 600 hectares of vineyard in the Franciacorta growing area. Beginning in December, our tasting panel begins the tastings of these base wines, which are kept in steel tanks and oak barrels. They identify their individual characteristics and design the assemblage, which is a very complex job, requiring passion and dedication–just like composing a symphony!”

Even the “reserve wines”–wines held back from previous vintages–can be tesserae in the mosaic, since they can ensure sensory continuity and consistency of a particular Franciacorta wine.
“For Cuvée Imperiale Brut, in fact, Berlucchi’s best-known and most widely-available Franciacorta, we assemble together one hundred base wines, with some 10 percent from previous vintages. On the other hand, to create the Palazzo Lana wines, our Riserva Franciacortas, we need only 4, maximum 6, base wines.”

Ziliani and his colleagues were involved in tastings until mid-March, then in April the tirage, or secondary fermentation bottling, began for the 2012 Franciacortas. And for the current vintage, the first toasts will have to wait for at least two years. “And at that moment, we could very well be surprised, since nature makes every growing year literally unique, and thus its wines, too.” 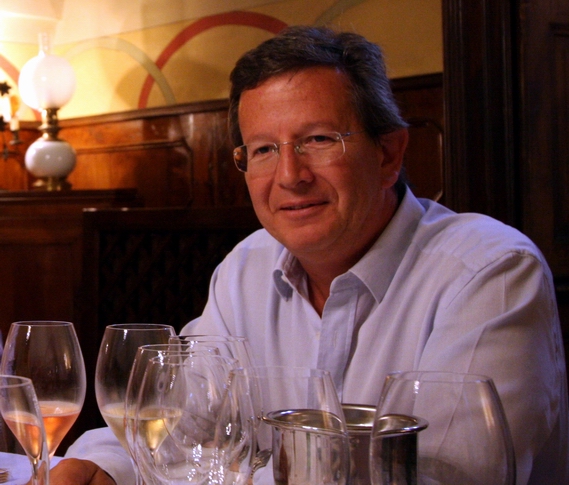